New capabilities for reservoir characterization now available in Jason 10 including better usability and performance, seamless connectivity with other GeoSoftware products and new facies-driven technology that addresses the need for more geological constraints in critical workflows.

The latest improvements in the Jason Workbench are released in 10.0.2. Updates and new features include: 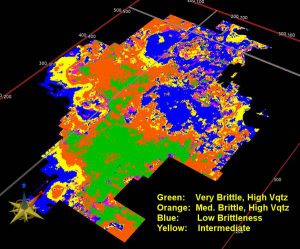 Deriving facies models from the outcomes of seismic inversions, and their derivatives, has become standard practice in reservoir characterization workflows. Although facies classification methods are rooted in Bayesian inference theory, they continue to evolve. CGG GeoSoftware has included some valuable new capabilities to improve facies analysis within its Jason FFP (Facies & Fluids Probabilities) interpretation tool as part of its new 10.0 release of Jason Workbench scheduled for the end of 2018.

Bayesian classification methods are dependent on the prior information, or “priors”, supplied to them. Of critical importance is the development of 3D priors for the Bayesian estimation of facies. The move to 3D prior information facilitates the encoding of layer ordering information, providing greater accuracy over simpler layer proportion methods. 3D priors are constructed with probabilities from petrophysical facies analysis, averaging over wells and ensuring structural compliance. Because of this implementation, dependency on well log interpolation is not needed.  Prior information can come from other sources too, such as gravity or magnetic data.

Deterministic inversions produce single sets of elastic properties. It is widely recognized that there must be some uncertainty about these values. This uncertainty is represented by the scatter around the best-fit line to a crossplot of filtered logs versus inversion outcomes. The residuals from the best-fit line are plotted as a histogram and modelled by their own probability density function. These are then formally incorporated into the Bayesian analysis so that facies estimates along with their probabilities of occurrence account for uncertainty, facilitating risk analyses. For these reasons, it is preferred to perform a facies-inversion workflow that can be run as a single application or separate steps, enabling these important QCs.

Bias is a classic problem in seismic inversion and can arise as algorithms are challenged to resolve thinner and thinner beds. The typical result is that layers look larger than they are and properties estimated from them are compromised. Derivatives, such as porosity, created from biased inversions will also be affected. In our workflow, any bias is captured and automatically encoded into the Bayesian analysis and the data points on the elastic crossplot are relocated. The estimated facies are therefore assured to be accurate.

Estimated facies sometimes fail to meet the needs and expectations of geo-modellers. Dual facies crossplots in both the petrophysical and elastic domains, incorporating rock physics templates, make the derivation of appropriate and useful facies much more achievable. Any changes in the petrophysical facies definitions are immediately reflected in the elastic crossplot.

The concept of per-facies trends is an important one in both depth-dependent facies analysis and the creation of low-frequency models (LFMs) for inversions. In previous work, CGG GeoSoftware has used 3D priors to obtain initial facies estimates after a first pass of AVO inversion, using a simple but structure-compliant LFM derived from logs.

With the new features available in Jason FFP users will be able to follow the strategy of a facies-first approach so that facies estimates coupled with per-facies trends can be used to build 3D low-frequency models for AVO inversions, again without any well log interpolation. The inputs are seismic partial-angle or offset stacks with wavelets removed, i.e. a quick post-stack inversion. The derived LFMs incorporate statistics, which can vary by geologic layer, respect dip and faulting and provide a better starting model for pre-stack inversion. A post-AVO inversion facies analysis confirms that the facies derived from the AVO inversion outcomes are consistent with the initial estimates but exhibit fewer false positives and wrong facies identifications.